“Get a Little Closer” to Disco

When you listen closely to this iconic style of music, especially the earlier years of Disco, the musicianship, groove and funk factor are off the charts. When you consider the light rock and folk music that had come before, this was a huge style innovation. It brought in a funky beat that had people pouring onto the dance floors like never before.

2017 marks the 40th anniversary of Saturday Night Fever! I see retro Disco paraphernalia everywhere lately in fashion, style and music. People are waking up to the fact that the Disco era had a lot to offer. It was an opportunity for people to go all out, stand out and look different, and to be celebrated for their imagination, creativity and individuality. Let’s bring dancing back – get up off the couch and move! When Allan asked the gal at the coffee shop why she was playing disco, she answered, “because it makes me happy.” My thoughts exactly.

Thanks so much to Creative BC and the Province of British Columbia for their support. Their continued commitment and funding for the arts enables artists like myself to live a dream and continue creating.

All songs are SOCAN

My album “Mirrorball” released in July 2017, and features 8 original Disco songs by myself and Allan Rodger. You’re going to want to boogie down!

My lifetime love of disco spawned my dream band, The Polyester Philharmonic. I’ve been performing a retro repertoire with them for the past 15 years so it was a long overdue leap to write and record a disco album with several members of this funky family!

If you’d like to support original Canadian music, please share the news with friends on social media. Supporting the arts by spending your hard earned cash guarantees there will be a future for artists. I love you for that! 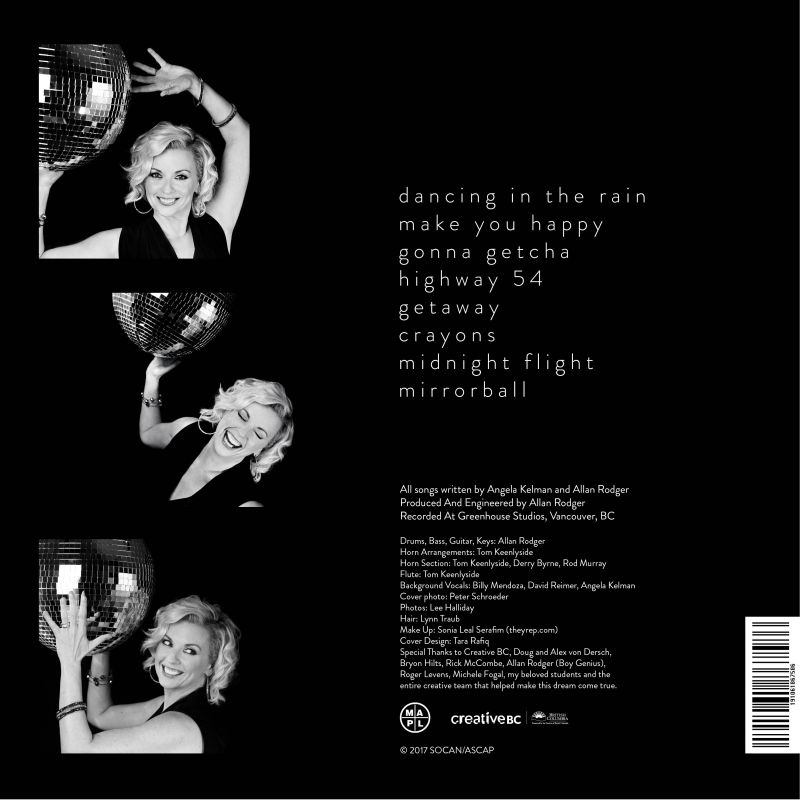 Special thanks go out to Doug and Alex Von Dersch, Bryon Hilts, Rick McCombe,  Allan Rodger (boy genius) and Roger Levens, Michele Fogal, my beloved students, and everyone else on the creative team! You all helped to make this dream come true!

Thanks so much to Creative BC and the Province of British Columbia for their support. Their continued commitment and funding for the arts enables artists like myself to live a dream and continue creating.

Learn More About the Mirrorball Project

Thanks so much for this great article in the Surrey Now-Leader, by Alex Browne, a great journalist, and friend from my Farmer's Daughter days. I'm so excited about these upcoming shows at the beautiful Blue [...]

Hey Music Lovers, Hope you're enjoying Mirrorball, my new original disco album! Don't have it yet? I'm excited to say that it's now available all over! Multiple Ways to Listen! 1. Buy it from my [...]

My brand new disco album, Mirrorball has just released, and here is the first video of moi performing the title track! Mirrorball - Title Track Video Get The Album! We had a [...]

LIMITED TICKETS! The release party for Mirrorball has a limited number of tickets available. Get yours before they sell out! Invite Your Pals and Dance your Face Off! We're celebrating the release of my new disco [...]

Mirrorball – The Story of “Make You Happy”

Inspiration Inspiration for writing songs comes from a myriad of places. It's almost like divine intervention. On new my disco album, Mirrorball, my co-creator and producer Allan Rodger would send me numerous musical tracks with [...]

More Than Meets the EarMy new disco album, Mirrorball is so much more than groovin' songs and a half decent singer (LOL). There are multiple layers that go into producing great music. I've had the [...]

What’s Your Favourite Song from Mirrorball?

I hope you've had a chance to check out my new disco album, Mirrorball! I'd love to hear which song or songs are your favourites! What? You Don't Have Mirrorball?! Here's how to get it! [...]

Mirrorball – Story of the Album Cover!

Hi Everybody! So excited about my new album cover for my disco album, Mirrorball which was released, Friday, July 7th!!! How the Album Cover Came to Be When I think of [...]

Mirrorball - Get Down on It!! You can finally buy it today! Dust off your boogie shoes! A funky, fun addition to your summertime playlist! Buy Now! My lifetime love of disco spawned [...]

The Disco Revolution In the 70’s, a hybrid of funk, soul, pop and salsa emerged from the gay underground New York clubs – Disco was born! It got people dancing in a whole new way [...]

MIRRORBALL – In the Throes of Recording!

May the 4th Be With You! Here's a shout-out to that fabulous decade, the 70s, that brought us Star Wars, the Carol Burnett Show, and DISCO! MIRRORBALL is Coming! For the past few months, I [...]